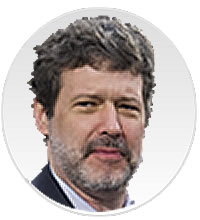 Charlie Mitchell is the editor and co-founder of Inside Cybersecurity, launched in 2013 as the first online news service dedicated to exploring the politics and policy challenges of securing cyberspace. His writing focuses on congressional debates over cybersecurity, the landmark framework of cybersecurity standards crafted by the National Institute of Standards and Technology, policy ramifications of major hacking events, and cyber developments in the telecom, energy, financial and other sectors.

Charlie is an authority on congressional procedure and politics, and has covered multiple subject areas over the course of his career including the structure of government, ethics, environmental and energy policy, international trade, tax reform, and healthcare reform. A veteran journalist, Charlie writes eye-opening, entertaining pieces for the most informed audiences in the nation's capital. He is a regular speaker and panelist at cybersecurity events in Washington, D.C.

He is the former editor-in-chief of Roll Call, where he built one of the most respected investigative units in the nation, and previously served as a senior editor and writer at National Journal's CongressDaily.

“Cyber in the Age of Trump”

Inside Cybersecurity's editor Charlie Mitchell presents an incisive, first-time examination of how President Trump’s unique, often baffling governing style has collided with the imperatives of protecting the nation’s cybersecurity. Available from Amazon .

“Hacked: The Inside Story of America's Struggle to Secure Cyberspace”

A book by Inside Cybersecurity editor Charlie Mitchell explores the challenges around crafting effective policies to protect the nation's businesses, government and citizens from increasingly dangerous cyber attacks. Available from Amazon.

Watch the webinar co-sponsored by USTelecom and Inside Cybersecurity that focused on priorities in the coming year. The webinar featured Diane Rinaldo, a former senior Commerce official who currently leads the Open RAN Policy Coalition; USTelecom's Robert Mayer; and Norma Krayem, vice president and chair of the Cybersecurity, Privacy & Digital Innovation Practice at Van Scoyoc Associates and a former senior official at the departments of State, Commerce, and Transportation.